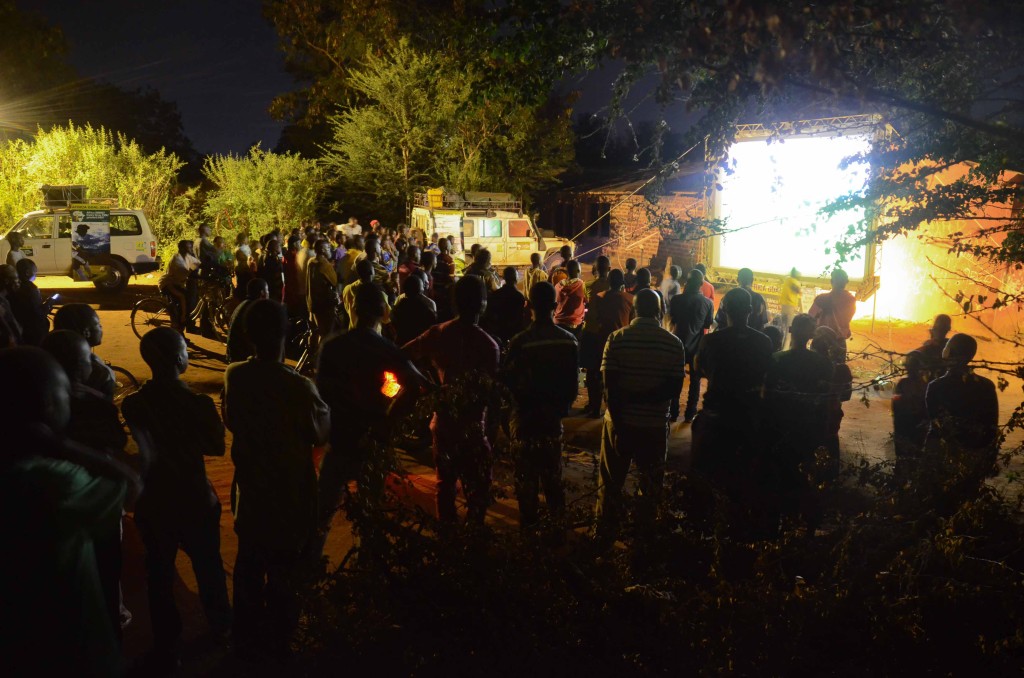 We had a very early start as had 750km left to cover before we arrived in Morogoro where we had a big event planned. We had hoped to cover more distance the day before but, unfortunately, the Landy had other plans. Just as dusk fell and with 200km left to cover the night before, we discovered that our headlights weren’t working. Pulling off on the side of the road, we checked all the fuses and electrical wires – quite a feat to follow the birds nest of wires which make up the Landy’s electrics! After an hour or so of poking around under the bonnet, the lights suddenly came back on – a huge relief to get back on the road although we’re still not sure which wire was jiggled in which way to get them working again!

Arriving in Morogoro town after the very long drive, we met with our partner organization, Hacoca, and followed them a few kilometres out of town on dirt roads to Chimwano Village. We set up the equipment on the edge of the main football field in the centre of the village. After a quick set up, Hacoca started an HIV discussion and question and answer session, distributing Misgav Football Club jerseys and shorts which were donated to Africa Goal as prizes for correctly answered questions. There was a lot of excitement about the jerseys and audience members were very keen to join in and try their hand at winning one of the jerseys. Hacoca do a lot of work around Gender Based Violence, as well as HIV, which made for a very interesting discussion around the different manifestations and causes of gender based violence – as well as the links with increased vulnerability and HIV risk.

As night fell and the match started it became clear that, although we had only driven a short distance out of town, we were already in rural Morogoro and the light from our projector and floodlights was the only visible light around. Since English is much less frequently spoken in rural Tanzania compared to some of our other locations, we bought a small radio to link up to the projector so that the football commentary could be transmitted in Swahili which made for a fun new addition to our kit.

As we packed up after the game, the village leader came to speak to us. He was thrilled that Africa Goal had come to his village: “Thank you so much for including us in your project. Very few people here would have seen a World Cup 2014 match but now they have the opportunity which is fantastic – HIV is also a big problem for us so it is really important that this information reaches the people”.