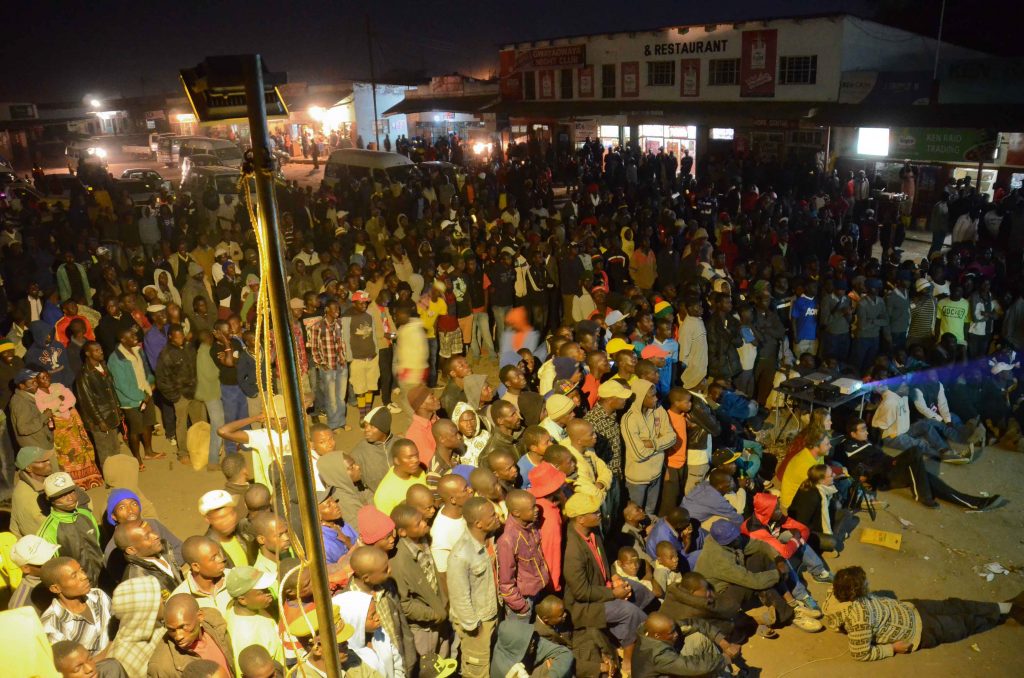 The World Cup Final – Africa Goal 2014’s final event – was held at Chinhoyi’s main bus terminal, a large bustling square lined with bars and shops. The team and partners, the Pumuhacha HIV/AIDS Prevention Project, arrived well ahead of the match to give plenty of time for the crowd to gather and receive HIV information. An information table was set up where people could get information about, and sign up for, HIV Counselling and Testing (HCT) and Voluntary Medical Male Circumcision (VMMC) – it was great to see many accessing information and signing up for services.

Before, during and after the match, 360 packages of Africa Goal’s targeted Information Education and Communication (IEC) materials for adults were distributed. All the children in the audience also received the children’s IEC material packages, with a total of 440 children’s IEC materials provided to Pumuhacha HIV/AIDS Prevention Project, with the remaining to be distributed to the young people in their support groups for people living with HIV. The pre-match and half time HIV quizzes garnered much excitement, with prizes including FC Brugge football kit, OneWorldFutbols, and Africa Goal T-shirts. Given such prizes, we were surprised when one prize winner requested to swap her prize for an Africa Goal IEC bag. It turns out she is living with HIV, and was keen to have the cool bag we distribute the IEC materials in to carry her Anti-Retroviral medicines. We’re glad the bag will serve this other useful purpose, and she was pleased to keep both.

As time neared to kick-off the crowd continued to swell, emptying the surrounding bars and attracting many key target groups amongst the audience, including truck drivers, chibuku (sorghum beer) fans and sex workers. Seeing the screen from the road on the way home from work, or responding to the news that spread rapidly across the town, the event attracted a further mix of people unaccustomed to spending an evening in this part of Chinhoyi, let alone the bus station. This element was one appreciated by some audience members. Walking during the match, the team found the event had attracted a huge crowd of around 2000 people reaching far back from the screen, so we are very happy we had opted for such a large space! Luckily it was possible to follow the match from quite a distance and many were sitting and standing on their cars to have a better view. Quite a sight and sound, with the football commentary also playing on multiple car radios in Shona.

Germany v. Argentina proved a tense contest, between two very equally matched teams. Early on Argentina striker Higuain had a goal rightfully ruled out for offside, and Germany hit the post, but neither team could breakthrough before ninety minutes elapsed and the game went into extra-time. Lionel Messi, as ever, posed a great threat in Argentina’s attack, and looked the likeliest to prevent 2014’s final being decided by penalties. However, in the end it was the young Germany striker Mario Goetze who won the game in the 113th minute with a fine controlled finish. The excitement continued to the last as Messi had a final chance to keep Argentina in it, but his free kick went over the bar and the World Cup was Germany’s. With the added excitement of fireworks lit for the occasion, the celebrations erupted in the bus stop.

Despite the setting, large crowd and exciting match, the crowd remained relatively calm and dispersed soon after the the contest was won. Nevertheless, it was helpful to have a few police officers among the crowd– especially as one won a football for the youth football group during the quiz and it provided an opportunity to supply the police station toilets with condoms. It was striking how openly many audience members asked for additional condoms to those in their IEC kits, with over 1000 extra distributed. Indeed, a high number of sex workers work in the area, so the event was able to meet some of their sexual health needs.

We were very pleased to have the District AIDS Coordinator – the person responsible for HIV issues for the district – join us for the event, and that both she, and our partners at Pamuhacha were thrilled with the turn out and the outreach achieved. So were we, as several audience members thanked us wholeheartedly, as we set about taking down the Africa Goal rig for the last time in 2014.
A highlight for us all was to lighten our load of the four sandbags, each weighing between 50 and 60 kgs, that we had used to steady the screen. We had set up the screen next to a small stall – basically a man with a table and stool – at the side of the bus terminal, and he was delighted with the prospect of levelling his ‘shop’ floor with beautiful dark red sand from Kenya.

With plans already in the pipeline for Africa Goal 2018, we are looking forward to the forthcoming tournament in Russia… but not without some rest before the long drive back to Kenya first.